Box Full of Angels is a fictional operating system based on a paper by Aaron Sachs (Assistant Professor of Media, Technologies, and Culture at Saint Mary’s College of California) concerning the influence of religious belief on the writings of Marshall McLuhan and Walter Benjamin. I created this Flash application as a digital edition of his 50-page paper, containing an XML based chat system, a tunable radio that delivers audio portions of the paper, and other multimedia adaptations of Aaron’s scholarship. It was presented at the 2009 National Communications Association annual conference and at the FILE 2009 Electronic Language International Festival in São Paulo, Brazil. [view exhibition catalog]

Centering on a fictional dialogue between Walter Benjamin and Marshall McLuhan in the afterlife, this Scholar-to-Scholar examines how their faiths influenced their intellectual development and media theory. In addition to focusing on posthumous communication, the medium, and spirituality—specifically Judaic and Catholic mysticism—the author also uses Benjamin and McLuhan to explore the communicative role of angels. As a multimedia presentation its form further extends the mediological exploration of angels to encompass angels as software. 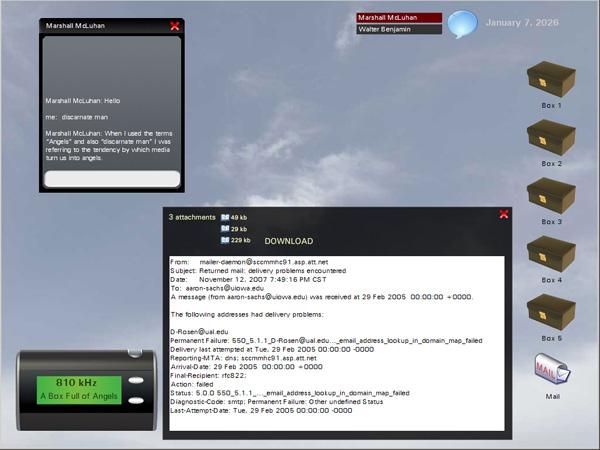